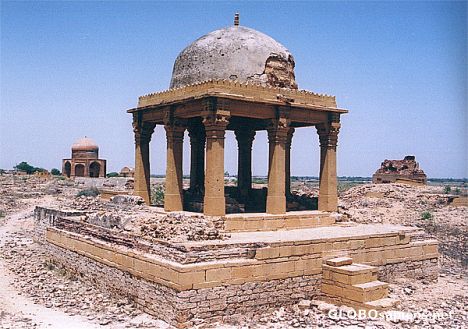 Morning drive from Karachi to Thatta. Arrive and proceed to visit Makli Hills, Shah Jahan Mosque and Keenjhar Lake.Thatta’s main monuments particularly its graveyard at Makli is listed with the World Heritage Sites. The Shah Jahan Mosque is also listed separately on the tentative list since 1993. Located 98 kms east of the provincial capital of Sindh Karachi, it makes for a practical escape for people from the city looking for to visit the charming old town. Thatta may be the place of ancient Patala, the main port on the Indus in the time of Alexander the Great. Siltation has caused the Indus to change its route many times since the days of Alexander, and the site of Patala has been subject to much imagined. Thatta’s monuments include the Jama Mosque (Shah Jahan Mosque and Badshahi Mosque), built by Shah Jahan in 1647-49 and lined with glazed tiles. This structure has 101 domes and is designed in such a way that imam’s voice can reach every corner of this building without the help of any loudspeaker or other device.Thatta is historically a vital region of Sindh which has served as a hub of literature, spiritual ideologies and socio political conflicts. Makli, the heart of interior Sindh is counted among one of the largest necropolis in the world. Located a few kilometers away from Thatta. Makli is a vivacious archaeological site in Pakistan; it covers about 15-1/2 square kilometers. The mausoleums and tombs in Makli are one of the greatest remains of Sindh and also dictate a lot about Sindh’s common structure from 14 to 18th century. Separately from the mausoleums of Jam Nizamuddin and Jan Beg Tarkhan, Makli has undertaken a lot of Sufis, fighters, poets, scholars. The creative monuments at Makli show evidence of Islamic ideologies and the Hindu mythology. The huge graves are made of hard rock and the mausoleums of the sun baked brick with different kinds of Quranic verses imprinted on them. This mosque was built on the orders of Shah Jahan, for the people of Thatta because they welcomed him with open hearts when his father died. The Shah Jahan Mosque is a great example of highly defined tile work. In total this mosque has 33 arches and 93 domes which are of different sizes which add the taste to its beauty. White and Blue tiles of bright touch have been put together in such a style that it looks like a beautiful mosaic.Thatta is a famous town in the Sindh province of Pakistan close to Keenjhar Lake, the largest fresh water lake in the country. Keenjhar Lake, 32 kilometers from Thatta is largest (54 sq kms) fresh water lake in Pakistan. It is vital for variety of production, passaging and wintering waterbirds.The Sindhi romantic legend of Noori Jam Tamachi between Noori, a fisher girl and Jam Tamachi, a ruler from Summa dynasty took place here. On the banks of lake is the tomb of Noori, visited frequently.After having detailed visits drive back to Karachi.